Medical science has spawned some of horror’s greatest creations, so why not take this idea and apply it to the undead? New for 2012, Biohazard zombies are a great way to put a science fiction spin on a Halloween favorite. The Biohazard Zombie theme opens doors to new haunt themes such as quarantines, chemical spills, a nuclear zombie apocalypse, or bioweapon attacks – the possibilities are nearly endless.

Dismembered body parts always add that much needed gruesome touch. Blood has become such a constant fluid in horror, toxic sludge is now like a breath of fresh air. The Severed Hands and Feet dripping green slime are perfect to litter your lawn with and create a trail of death for your guests to follow.

The Cut off Biohazard Zombie Head appears as if a radioactive claw ripped open the flesh as scalding, radioactive ooze drenched the rest of the head. You can hang it from trees or doorways to foreshadow what’s to come for any trespassers.

The Biohazard Zombie Doctor, Nurse, and Lab Zombie are all full size standing props that will really add authenticity to your biohazard theme. Rich in detail from head to toe, each individual character is high quality. The Biohazard Zombie Doctor and Nurse are both dressed in uniforms, but their savaged and torn bodies create the idea that they were attacked while tending to infected patients.


The Biohazard Lab Zombie appears to be a researcher who was caught in the wrong place at the wrong time. His Biohazard suit and gas mask are both coated in slime while gaping holes of exposed flesh cover his face. The shredded, oozing faces play into the theme of an uncontrollable outbreak. With mutilated uniforms and light up eyes, these props create the feeling as if there is absolutely no hope of survival within sight. 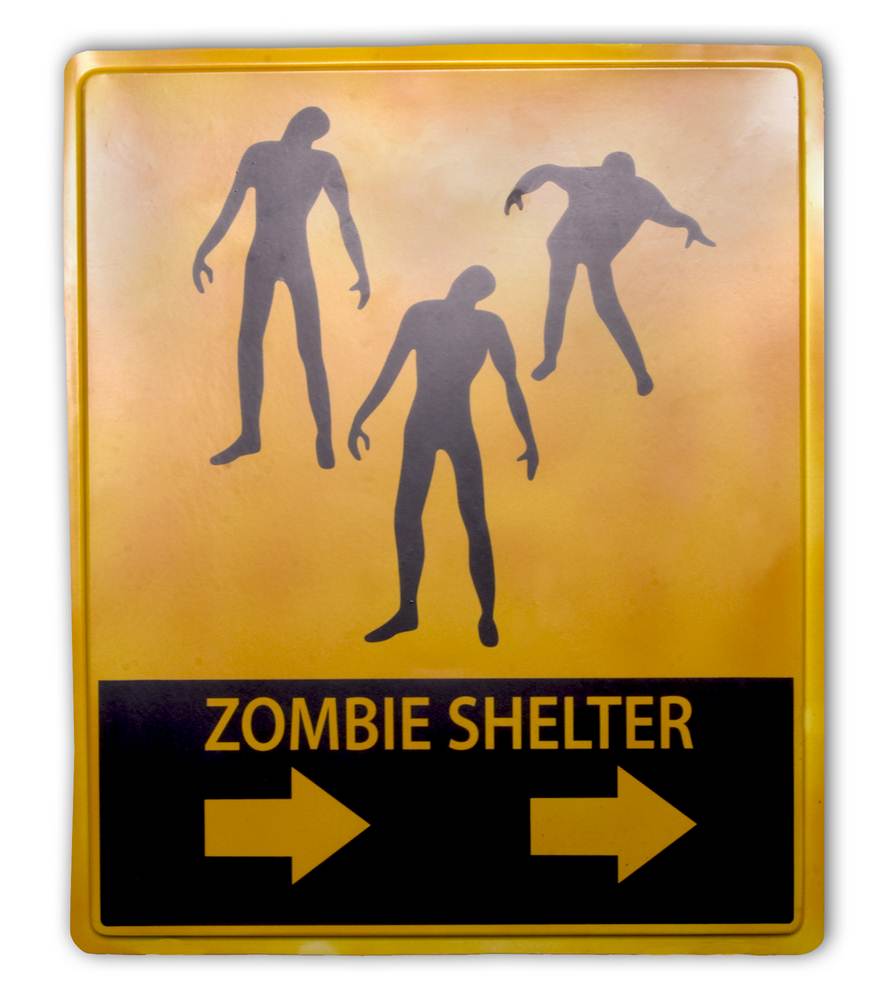 Another way to add to the biohazard theme is with signs. Two notable ones that can play into a biohazard outbreak are the Zombie Shelter Sign and the Hospital Directory Sign.  With either, guests will have the feeling of walking through a fallen haven that is now littered with the grisly remains of the unfortunate. These signs are also a great way to keep people moving through a haunt without taking them out of the Halloween mindset.

If you are looking to get interactive with the biohazard theme then look no further than the Biohazard Collector Costume. Although this costume has been available for a couple years, it fits in really well with this theme.  This costume allows you to be a part of the hazmat team that is looking for human remains to conduct research on and hopefully find a cure for this horrible disease.

You can also use the Biohazard Hypo Zombie Needle that is filled with the noxious undead fluid. The Biohazard Zombie Respirator Mask is an easy way to add a toxic element to whatever costume you have. Simply strap it on and hope that the viral biohazard fumes don’t take you down.
You can really use your own personal imagination to add a twist on any biohazard idea. With the biohazard theme, anyone can have a different take on the classic undead.
Posted by Halloween Asylum at 12:01 PM